$NIO Appears To Be A Long Term Opportunity

NIO traders are buying shares at 6x-7.7x 2022 sales. I believe that the company is not that expensive with triple digit sales growth and double digit gross profit margin. However, shareholders need to understand that there are significant risks to factor in. Conservative individuals who don’t like share price volatility should pass on NIO. The company will most likely deliver stock returns in the long term.

Founded in 2014, NIO designs and offers smart electric vehicles in China. With a significant number of investors from the United States and the government in China, the company is said to be the new Tesla (TSLA) in Asia. NIO has offices in the United States, Europe, and China:

The demand for NIO cars has been on the rise over the summer season, from October to December and from March to April. Many investors may be buying shares in March to profit from the company’s seasonality pattern. With this in mind, reviewing the company’s financials makes a lot of sense now.

I believe that most shareholders invested in NIO because it produces electric vehicles. Notice that the global electric vehicle market could grow at a CAGR of 21.1% from 2019 to 2030. I believe that the company is interesting because it produces EVs. It is also interesting because of its autonomous driving technologies. Note that NIO has ties with companies like Tencent (TCEHY), Bidu (BIDU), and Mobileye, which are helping NIO create a new driving revolution. NIO represents what most individuals called a new generation in the way we use our vehicles:

Traders May Be A Bit Disappointed With The Quarterly Results

After delivering quarterly results, NIO saw a decrease of more than 13% in its share price. With many traders and investors out there remarking the company’s net losses for the quarter, selling pressure increased. The company did not only deliver detrimental EPS, which was below expectations. Sales growth was also lower than expected for the quarter and for the year end 2020. Defending the company’s financial figures is becoming a bit difficult these days:

In my opinion, investors need to understand that sales growth is not the only thing that matters to the market. NIO grows at a massive rate, and net losses are decreasing very rapidly. However, market analysts had high expectations about the company’s earnings and sales growth. If NIO delivers worse than expected numbers, the valuation of the company will most likely decrease. Notice that the numbers were not that bad after all:

Market analysts were expecting sales growth of more than 107% in 2020, 121% in 2021, and 50% in 2022. I wonder whether many traders did realize that NIO may not be able to deliver such massive financial growth. The recent decrease in the share price suggests that many investors are a bit disappointed.

With that about the current negative sentiment about the results, I admire the company’s positive communications. I do believe that NIO could offer significant beneficial figures in 2021. In January and February, the company delivered triple digit sales growth. In my opinion, the market did not have a look at those numbers, which were offered in the quarterly report. We are talking about 689% year-over-year growth in February:

NIO concluded a transformational 2020 with a new quarterly delivery record of 17,353 vehicles in the fourth quarter of 2020. The strong momentum has continued in 2021 as we achieved a historic monthly delivery of 7,225 vehicles in January and a resilient delivery of 5,578 vehicles in February, representing strong 352% and 689% year-over-year growth, respectively. Source: 10-Q

That’s not all. In the quarterly report, NIO reported positive feedback from users regarding its new ET7 sedan model. I believe that it is very positive. On top of it, NIO noted that its autonomous driving capabilities Aquila Super Sensing and NIO Adam SuperComputing will be offered through a monthly subscription service. I appreciate the business initiative. In my opinion, if more and more drivers move into autonomous driving, the company’s revenue will most likely increase thanks to the subscription model, making autonomous driving technology a bit more valuable. Drivers will have to pay a bit more if they want access to the company’s revolutionary technology:

If you don’t like NIO’s subscription model, notice that the experts believe that the autonomous vehicle market could grow at a CAGR of 63.1% from 2021 to 2030. I believe that more and more consumers will pay the subscription in the near future. They will not have to buy new NIO cars with that technology. Drivers will only have to pay for the company’s services.

I Like That NIO’s Margins Are Increasing, And Cash Increased A Lot

A very relevant financial figure was reported in the 2020 Q4. The company’s gross margin increased from -8.9% in 2019 Q4 to 17.2% in 2020 Q4. It is extremely positive. It means that NIO’s economies of scale are finally offering positive results. If the company continues to sell more and more cars, we will soon see positive EBITDA and net income. Most analysts are expecting positive EBITDA in 2023.

NIO’s balance sheet appears quite solid with $5.8 billion in cash and an asset/liability ratio of 2.4x. In addition, I appreciate that the cash in hand increased by 4,700% in 2020. It means that both equity and debt investors are giving money to the company. There is a large amount of demand for the equity and debt of NIO, which is always a beneficial thing:

Taking into account both short term and long term borrowings, NIO’s debt is larger than $2.2 billion. Debt is less significant than the cash in hand, so I don’t believe that investors will be afraid of the company’s financial obligations.

There is a significant amount of institutional investors inside NIO. However, let me mention that the Norges Bank disclosed very recently up to 13.6 million shares. Many people celebrated that the investor bought shares. Interestingly, NIO expects to start selling cars in Europe. The company will start selling cars in Norway. I wonder whether other large banks in France, Germany, or Italy will buy shares when the company starts selling cars in these regions. 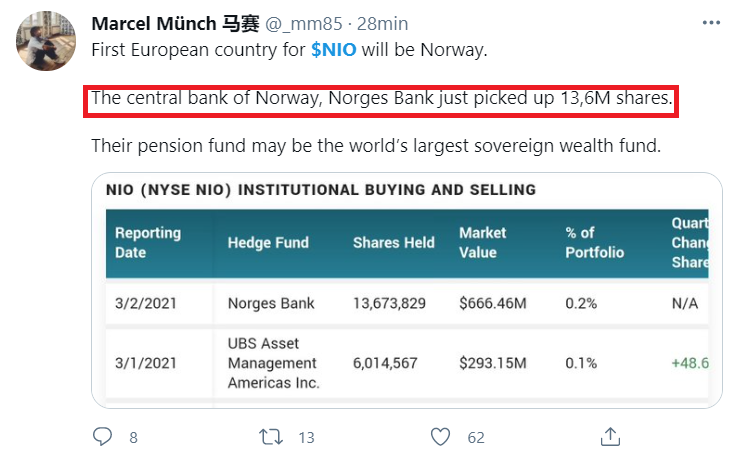 I would also like to mention that traders are researching NIO’s names more and more on the internet. Very recently, google users in the US searched “NIO” more than “TSLA” (TSLA), which I believe is quite relevant. Keep in mind that NIO does not sell in the United States, but Tesla does. Clearly, the increase in stock for NIO stock is increasing very rapidly:

With a weighted average number of ordinary shares of 1.4 billion at $40-$47, the market capitalization would be $56-$65 billion. I believe that NIO could easily target 2022 sales of $8.43 billion. Most analysts believe that NIO’s sales will be close to that figure. It means that NIO trades at 6x-7.7x 2022 sales, which, in my opinion, does not look that expensive.

With that, if NIO continues to deliver worse than expected revenue in 2021, I would understand that more and more investors will keep selling shares. That’s, in my view, the most significant risk of NIO. Also take into account that revenue estimates may decrease in the future. Revenue estimate for 2 fiscal years ahead decreased from $10 billion in January 2019 to $2.5 billion in January 2020. I don’t like the massive swings in the sales estimates, so I understand conservative investors who sell shares.

NIO is not for everyone. In my opinion, conservative individuals may not buy shares of NIO. The share price shows a significant amount of volatility because the valuation is based on sales expectations. Currently, NIO does not report positive net income, and it may not do it in the near future. If you are not ready to see large stock price declines from time to time, you may not buy shares.

If you are a shareholder, you should know that NIO collaborates with JAC, which is a state-owned automobile manufacturer from China. NIO said that it may have to pay JAC if the manufacturer suffers losses. I don’t think investors will appreciate that in the past, NIO had to pay to third parties:

As of September 30, 2020, we had paid JAC a total of RMB973.0 million, including RMB440.2 million as compensation for losses incurred since 2018 and RMB532.8 million for manufacturing and processing fees. If we are obligated to compensate JAC for any losses, our results of operations and financial condition may be materially and adversely affected, particularly if such losses are incurred as a result of lower than anticipated sales volume. Source: Prospectus

NIO receives money from China’s central government. The subsidies were reduced in 2019, and could be reduced again in 2021 and 2022. In my opinion, a reduction in subsidies in the near future could push NIO’s revenue down. As a result, I would expect the selling pressure to increase, which may lead to a decrease in the share price:

The 2019 subsidy standard, effective from March 26, 2019, reduced the amount of national subsidies and canceled local subsidies, resulting in a significant reduction in the total subsidy amount applicable to the ES8 and ES6 as compared to 2018. Further, the 2021 and the 2022 subsidy standard are expected to be reduced by 20% and 30% respectively as compared to the standard of the immediately preceding year. Source: Prospectus

I dislike that NIO has three types of shares. A few shareholders own more votes per share than other minority shareholders. As a result, they may control certain decisions, which may not benefit minority investors. If the management does not perform, it may be very difficult to make a change:

NIO is trading right now at 6x-7.7x 2022 sales with triple digit sales growth and double digit gross profit margin. In my opinion, investors will make money in the long run. However, they will have to suffer a significant amount of stock price volatility and some risks. If you are a conservative investor, NIO is not for you. For all the others, NIO appears to be a long term opportunity.

Disclosure: We Don’t Own NIO Shares

Tags: How to invest in ChinaNIO

5 Risks Of Investing In Chinese Stocks And Trading Them

© 2017 Stock Market Revolution - The secret of freedom lies in educating people, whereas the secret of tyranny is in keeping them ignorant.