Perdoceo Education trades at less than 5x EBITDA, and reports 9% sales growth and 29% EBITDA margin. The company is buying other small universities at less than 5x EBITDA. I believe that the valuation of Perdoceo Education will be larger when institutions get to know the company’s most recent financial performance. Perdoceo has a significant amount of cash in hand, and does not report significant net debt. Recently, Blackrock bought a 15% stake, which confirms that there is an institutional demand for the stock.

Perdoceo Education Corporation runs colleges, institutions, and universities in the US. The company owns several well-known campuses in the US:

Overall, the majority of the Perdoceo’s students are over 30 years of age, and study business. More than 66% of the students pay for the bachelor’s degree: 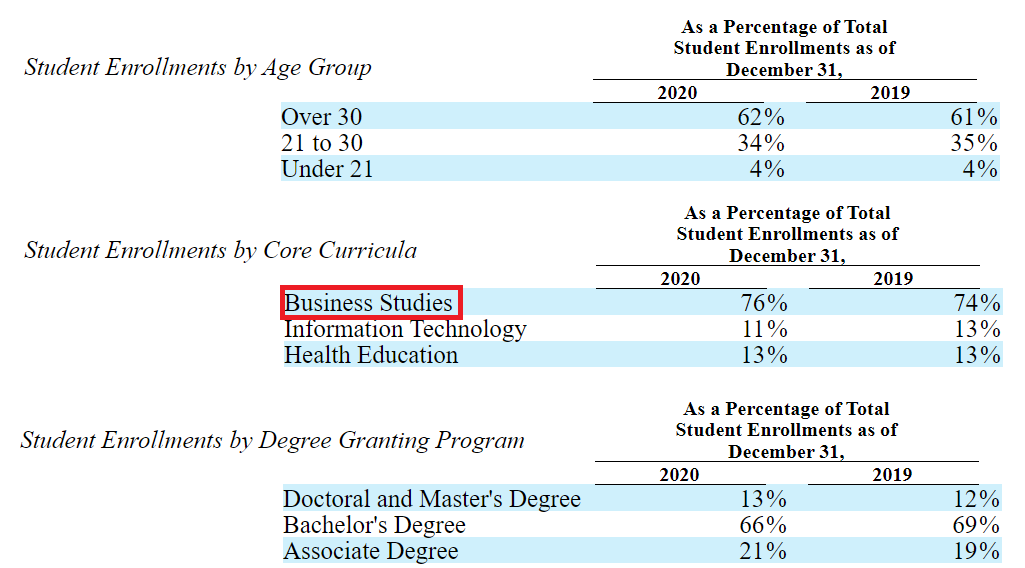 I believe that a significant amount of investors decided to invest in the education of students in China. I wonder whether they forgot about education in the United States. Perdoceo Education trades extremely undervalued without any particular reason. The company is profitable, and grows both organically and inorganically. With each passing year, the enrolment of the students is increasing:

PRDO reports EBITDA growth of 8% and an EBITDA ratio of 29%. The EBITDA grew because the sales increased, and the general and administrative expenses decreased. That’s not all. The company’s operating income grows at 10% y/y. I also appreciate that net income has increased by 77%.

PRDO shows $105 million in cash. 14% of the total amount of assets is represented by cash. I believe that money managers will appreciate it.

Besides, Perdoceo Education Corp. has positive working capital, which market participants will appreciate. It means that PRDO will be able to pay its short-term liabilities when they are payable.

In 2020, goodwill increased by 35%. The company is growing through acquisitions, which most value investors will appreciate. Trident University was acquired for $43 million. In 2018, Trident reported EBITDA of $9 million, so the company paid close to 4.7x 2018 EBITDA:

On March 2, 2020, the Company acquired substantially all of the assets of Trident University International (“Trident University”), an accredited university offering online undergraduate, master’s and doctoral programs with a strong focus on graduate programs. Source: 10-k 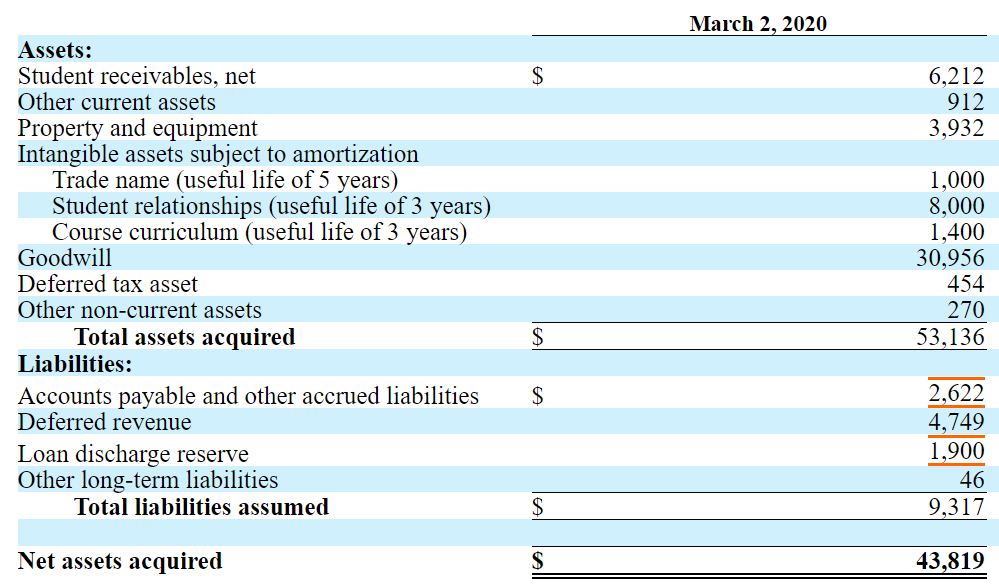 If the M&A integration is properly done, investors will most likely expect sales growth and EBITDA growth: 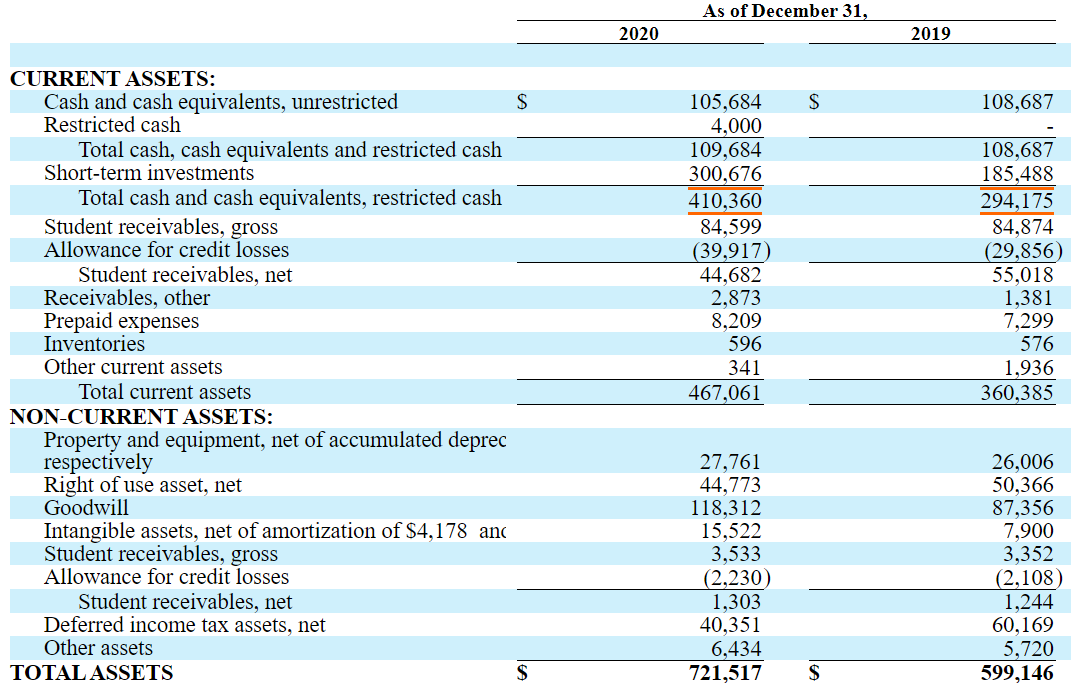 In addition, the price to book value is below 1.5x, which means that PRDO appears cheap. PRDO’s debt to equity ratio is below 2x, and the asset/liability ratio is equal to more than 10x. As a result, I don’t expect that a financial advisor will be worried about the company’s financial obligations.

In Q4, PRDO reported quarterly sales of $171 million and gross profit of $142 million. The gross profit ratio was equal to 83%. Furthermore, PRDO is profitable, which is a positive feature. Perdoceo Education Corp. released positive quarterly EBITDA of $51 million. PRDO also showed positive net income of $27. 051 million. I feel that when more investors get to know the financial statistics of PRDO, the stock demand will increase.

The company has never been that low. If we use the EV/EBITDA ratio, ten years ago, Perdoceo Education traded at 10x-20x. It is extremely cheap. Trident was acquired for 4.7x EBITDA. Perdoceo Education is a larger institution than Trident, so it will most likely try to acquire Trident for more than 4.7x-5x in the near future: 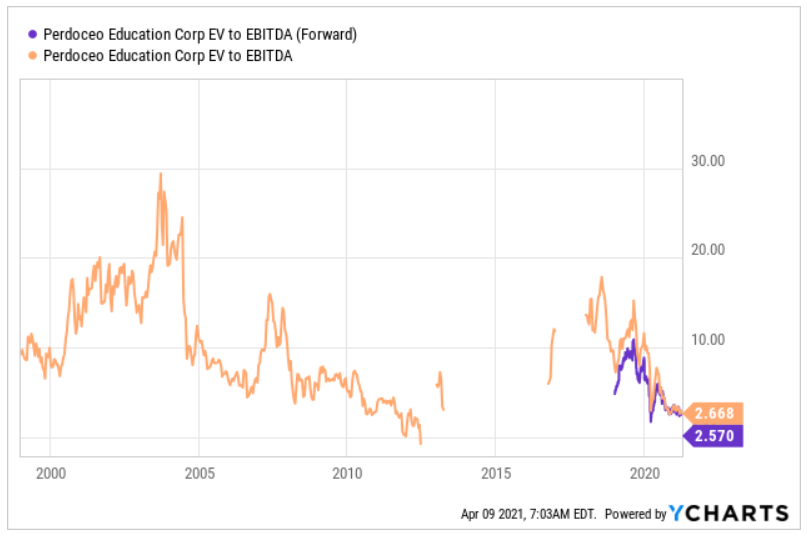 Perdoceo Education reported EBITDA of $450 million in 2005-2007. In 2015, the company reported negative results. However, the EBITDA has increased in the last six years. The company’s valuation has not grown when EBITDA increased. In my view, if a sufficient number of investors study the company’s financials, the valuation will most likely increase:

I appreciate that Perdoceo Education is making significant efforts to push the company’s share price up. Perdoceo Education launched a stock repurchase program. As a result, I believe that the stock price will most likely increase in the near future.

On November 4, 2019, the Board of Directors of the Company approved a stock repurchase program which authorizes the Company to repurchase up to $50.0 million of our common stock from time to time depending on market conditions and other considerations. The program expires on December 31, 2021. Source: 10-k

Perdoceo receives a significant amount of money from loans. If students cannot have difficulties in obtaining credit to study, Perdoceo’s sales will most likely decline. As a result, I would expect the stock price to fall:

For the year ended December 31, 2020, approximately 74% of all our students who were in a program of study at any date during that year participated in Title IV Programs. Source: 10-k

Under the 90-10 Rule, an institution that derives more than 90% of its cash receipts from Title IV sources for a fiscal year will be placed on provisional participation status for its next two fiscal years. We have substantially no control over the amount of Title IV student loans and grants sought by or awarded to our students. Source: 10-k

Perdoceo Education trades at less than 5x EBITDA, reports sales growth, and has significant cash in hand. In addition, many institutions are buying shares. The company traded at more than 15x EBITDA in the past. I don’t really see why the market is not interested any more. In my opinion, any financial buyer would buy the company at the current valuation. In any case, I am a buyer.

We don’t hold Perdoceo shares. We were not paid to write about Perdoceo.

© 2017 Stock Market Revolution - The secret of freedom lies in educating people, whereas the secret of tyranny is in keeping them ignorant.